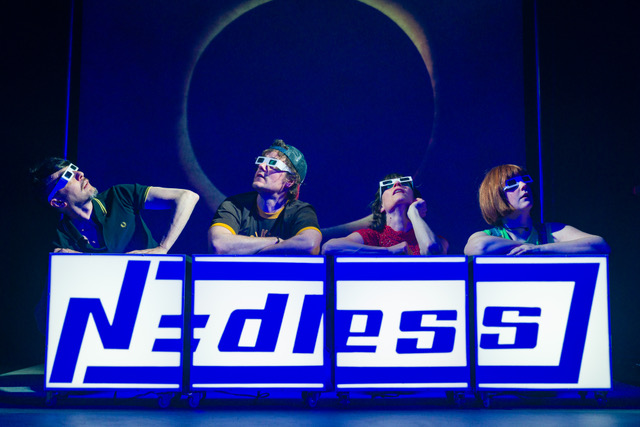 This project was highly original – a multi-strand comedy show with an arts documentary-style. Endless featuring N:Dless set out to explore complex human issues through the story of a fictional band called N:Dless. The piece reflected on fame, the 90’s era and the free party scene. It examined what can happen to us in mid-life when we haven’t ‘made it’ despite all of our hard work. Issues such as the pain of failure, aging and cancer are tackled head with great sensitivity, honesty and humour.

‘This is a unique, surprising and glorious mash up of all things ridiculous, musical and emotional. Using an impressive mix of film, sound and top notch clowning, the characters gently weave around the universal and the mundane.’ E.R. Artistic Director, Wise Children

An original concept music EP download was sold as the show’s program which gave an added contextual layer to the work. Alongside this, University filmmakers were mentored by a member of the Trifle Gathering Productions team to create small video vignettes around the N:Dless story. Some of these films showed ‘90’s music video extracts’ others featured tributes to the band from other artists. These vignettes were integrated seamlessly with the lighting and set design, immersing the audience in the ‘90s music scene.

This project enhanced the skills of the production team, who came together to deliver a technically sophisticated show and in doing so experienced great professional development. Trifle Gathering Productions used this project to explore new methods of working, adapting the set design to fit various venues. TGP has a real passion to reach local Cornish communities and engage typically non-theatre going groups:

‘Our rural audiences are particularly responsive to our style of work, its takes a lot of hard work to get them through the door, but when they are there you can feel an overwhelming sense that the work is of great importance.’