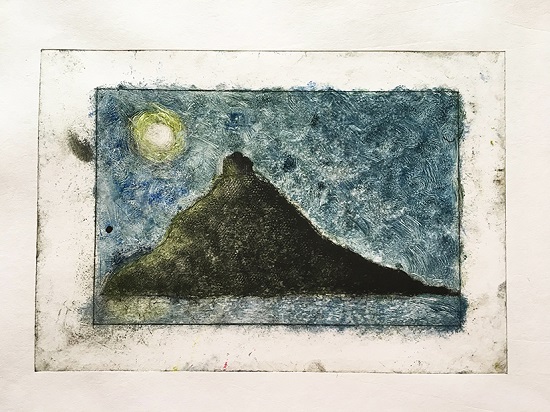 OurTown is a series of art projects giving a chance for the people of Penzance to express their love for their home town.

The first project was a series of Printmaking workshops provided by artists from PressGang for the guests of StreetfoodPZ; a project which provides hot food and care to people living on the streets in Penzance.

The group faced an initial challenge persuading guests to take part in the workshops. However through word of mouth the message quickly spread around this vulnerable community that the sessions were worth going to. The workshops gave participants first and foremost somewhere warm to sit for a couple of hours during the winter evenings without being moved on. In this safe space they were offered the opportunity to learn about the printmaking process and to do it for themselves.

Individuals from disadvantaged backgrounds can often feel marginalized, as though they exist on the fringes of society. ‘Art’ can itself feel like an intimidating or exclusive activity, so many people never get the chance to experience its huge benefits for social, physical and mental wellbeing. The team from PressGang and StreetfoodPZ made great efforts to set up a welcoming and accessible drop-in space with an inclusive atmosphere. Through creative making the participants were able to interact with others, talk about their lives and express themselves.

The workshops were run in small groups so those taking part were offered individual expert tuition and on-going support. The printmaking process requires imagination, dexterity, patience and considered execution. The men and women taking part showed they had these skills, producing work of great quality. Several of the participants even worked collaboratively to create artwork together.

Strong positive changes were seen in the individuals who took part, including developed confidence, improved mental wellness, and increased self-esteem. The success of this project was only possible due to the trust that was built between StreetfoodPZ volunteers, the Press Gang artists and the participants.