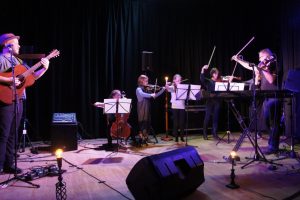 On June 2nd The People’s String Foundation 32 piece Gypsy Orchestra performed at the Hall For Cornwall which was filmed and recorded. Res Publica is a multi-media theatre show backed by this live recorded footage of the Orchestra. It’s is a heartfelt and human project that tours to places that would not usually fit or afford an orchestra. Ben Sutcliffe and fellow musician Zaid Al-Rikabi will play the key parts live over the top of a projection of the ‘Virtual Orchestra’. There will be a plethora of art forms to the footage which will share the narrative; such as puppetry, dance, circus, art, cinematography, animation and acting. There will be 16 workshops alongside the Res Publica tour. Making the workshops free is essential to the ethos of Res Publica as a community-focussed project, delivering the chance to participate to all in the community despite means or location.