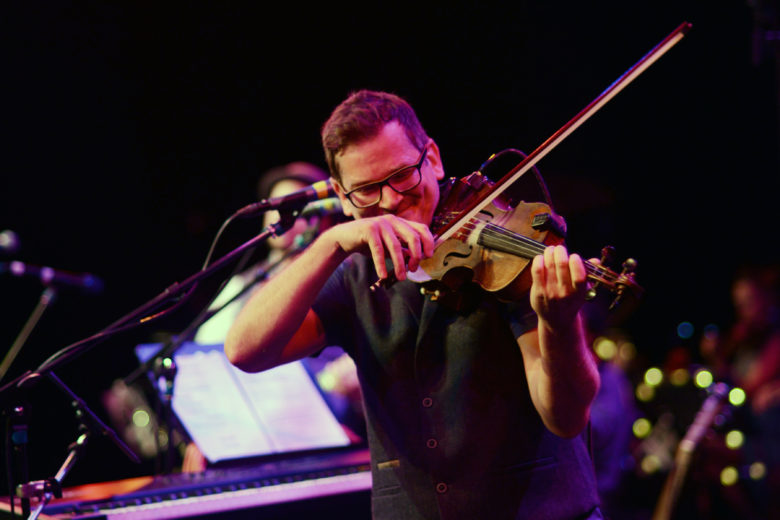 In the summer of 2018 The People’s String Foundation 32 piece Gypsy Orchestra was recorded performing at the Hall For Cornwall. The incredible footage was used as backing for the multi-media theatre show Res Publica, which saw Ben Sutcliffe and fellow musician Zaid Al-Rikabi play live over the top of a ‘Virtual Orchestra’ projection.

Res Publica has been a unique community-focussed project that went to isolated places across Cornwall and the South West which could not usually fit or afford an orchestra; village halls, pubs, cafes, churches, theatres, galleries and streets.

The team gave free workshops alongside the performances, offering everyone the chance to participate despite their means or background. The workshops explored the show’s narrative through puppetry, dance, circus, art, cinematography, animation and acting, with the performances being enjoyed by over 6000 people in 34 locations.

One viola player from the Penzance Youth Orchestra was so engaged with her workshop and subsequent performance at St Just Miners’ Chapel that she asked how she could have a career in writing and musical performance. Ben has since invited her to shadow him when he works with the Minack Theatre later in the year.

The Res Publica project was refined and developed during the tour and is now completely self-contained and ready to tour again later in 2019 without any financial support. It’s fantastic that this show has developed to the point where it is self-sustaining. What’s more the team will still be offering free community workshops alongside the tour!